When autocomplete results are available use up and down arrows to review and enter to select.
Resources + Insights
Sep 15, 2022 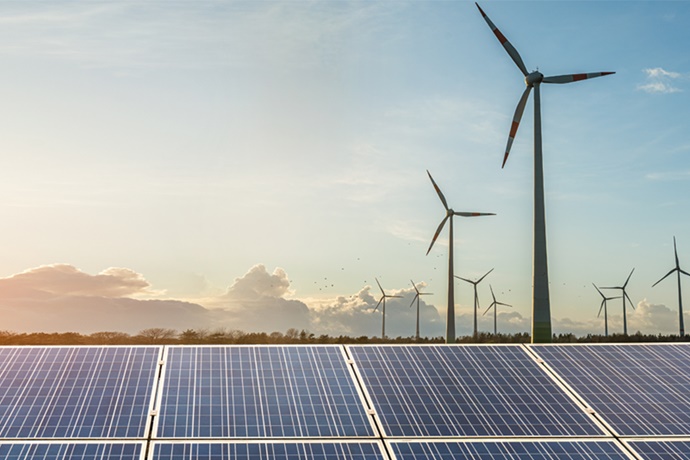 The renewable energy sector has seen a great deal of growth in recent years as environmental, social and governance (ESG) pressures have pushed the energy industry to invest in clean energy and move away from fossil fuels that negatively impact the environment and contribute to climate change.

This ongoing drive to net zero carbon got a boost on August 16 when President Biden signed the Inflation Reduction Act into law. The act includes $369 billion in climate and clean energy investments and as much as $350 billion in additional federal loans and loan guarantees disbursed by the Energy Department for energy projects and businesses.

Provisions in the law include a nationwide program to reduce methane emissions, more than $135 billion in clean energy tax credits to ramp up solar and wind power, tax incentives to increase adoption of electric vehicles, and much more.

While industry experts agree that the energy transition is required for the future health and sustainability of the planet, they also acknowledge that such change is not without risk and there are still a lot of unknowns about how the insurance industry might respond. Retail agents and brokers are wise to stay up to date on the latest developments so they can manage clients’ expectations as the situation evolves.

As energy companies ramp up their efforts to produce wind and solar power, they are building farms in low-cost areas where the resources of wind or sunshine are abundant. But because these areas are typically unpopulated (and therefore have no claims histories in those locations), it can be easy to underestimate the potential exposures to severe convective storms and related damages.

This lack of storm prediction has led to some unfortunate surprises for insurance carriers. In the second quarter of 2022, there were multiple catastrophic hail events that caused losses in excess of $50 million in the solar industry. These near-record losses all occurred within a span of 60 days, leaving the insurance market reeling and cautious of further risk accumulation.

Because these are still relatively new technologies, there are few claims precedents that can be used in underwriting decisions, and many property and casualty (P&C) insurers are still ramping up their risk modeling processes to address issues like prototypical technology. Once considered a bad word in insurance, this technology is now the norm in renewables. The constant pressure to innovate and create lower price and more efficient renewable technologies comes with a research and development (R&D) cost, which can carry over to insured losses.

Beyond insuring the technologies involved, there are other property risks associated with the installation and removal of renewable energy sources.

For example, if a commercial property owner installs solar panels on the roof, how does that affect the risk to that property? Is the roof built to hold that big apparatus? Is there damage being done to the roof during installation? Has this impacted exposure to leaking, or changed the life expectancy of the roof?

Transitioning to cleaner energy comes with additional costs, and possibly some additional risks that insureds may not have considered—like increased risk of worker injury.

As the renewable energy sector expands, workers will have career opportunities with a wide range of good-paying jobs, such as solar installers, wind turbine technicians, hydropower electrical engineers and mechanics.

With the creation of these new jobs, we will see a surge of people entering the field. How will worker safety be addressed in these emerging occupational settings?

Workers in the green jobs industries often face many of the same common hazards—fires, falls and electrocution—found in many other industries. But according to the Occupational Safety and Health Administration (OSHA), the rapid growth in so many different and emerging areas of renewable energy could be exposing workers to new hazards that might not have been previously identified.

Employers will need to consider which jobs present greater risk factors or are prone to a higher-than-normal number of claims and come up with plans to keep workers safe and prevent losses.

Loss prevention isn’t only on the minds of individual business owners. The transitioning to cleaner energy sources impacts whole communities.

Electric vehicles (EVs) are being promoted worldwide as a key technology to reduce oil-related emissions and fight climate change. According to the US Department of Energy, EV sales grew by 85% from 2020 to 2021, while sales of plug-in hybrid electric vehicles (PHEVs) more than doubled, with an increase of 138% over the previous year.

The success and efficiency of EVs, however, is heavily dependent on energy infrastructure and the capacity of electrical grids. For example, in California—a very pro-EV state—officials have warned that extreme heat and other climate change impacts will threaten the reliability of the state’s electrical grid over the next five years, potentially causing electricity blackouts due to power supply shortages.

What the electrical grid has the capacity to support is a question that extends beyond EVs. There is significant financial risk associated with the blackouts and brownouts previously seen in California. For example, if a business doesn’t have power and it can’t operate, that could trigger a business interruption loss.

While many companies are willing to take steps to cleaner energy sources, the question remains: What are the unforeseen exposures? Some experts fear the race to net zero is causing some “short-sightedness” around the long-term environmental implications of green energy investments.

While most EVs and PHEVs sold today tend to produce significantly fewer global warming emissions than traditional gasoline-fueled vehicles, they do create some new environmental exposures.

For example, the production and disposal of EV batteries has a substantial environmental impact. The batteries typically last 8-10 years and they contain heavy metals, such as cobalt and nickel, which don’t break down in nature. They’re very expensive to recycle, and most countries don’t yet have a policy for how to manage the waste from EV batteries. As EV production ramps up, the ultimate environmental impact (beyond the current focus on reducing carbon emissions) needs to be considered.

Another example is solar panels. It costs an estimated $20–$30 to recycle one solar panel, so the fear is that a lot of them will end up in landfills instead. When you add up the accumulative amount of waste entering landfills over time, there are likely going to be issues with water leaching out and contaminating water supplies.

In a similar vein, Xcel Energy estimates a cost of a half million dollars to decommission one wind turbine. Most landfills aren’t prepared to take the turbine blades, so they need to be cut into smaller pieces, which creates a whole other cloud of pollution from the chemicals in the fiberglass, carbon fiber, and the other materials inside those turbines.

Companies need to carefully consider their environmental risk exposures and put mitigation strategies and insurance policies in place to not only protect themselves from losses, but also protect the environment from additional pollutants.

As the world moves toward a future powered by renewable energy, companies will need both reliable insurance coverage and risk management solutions to address their growing exposures. Amwins has specialized brokerage services with knowledgeable industry experts who can help you and your clients navigate the evolving risk landscape. Contact your Amwins broker today.

This article was written in collaboration among Amwins experts: