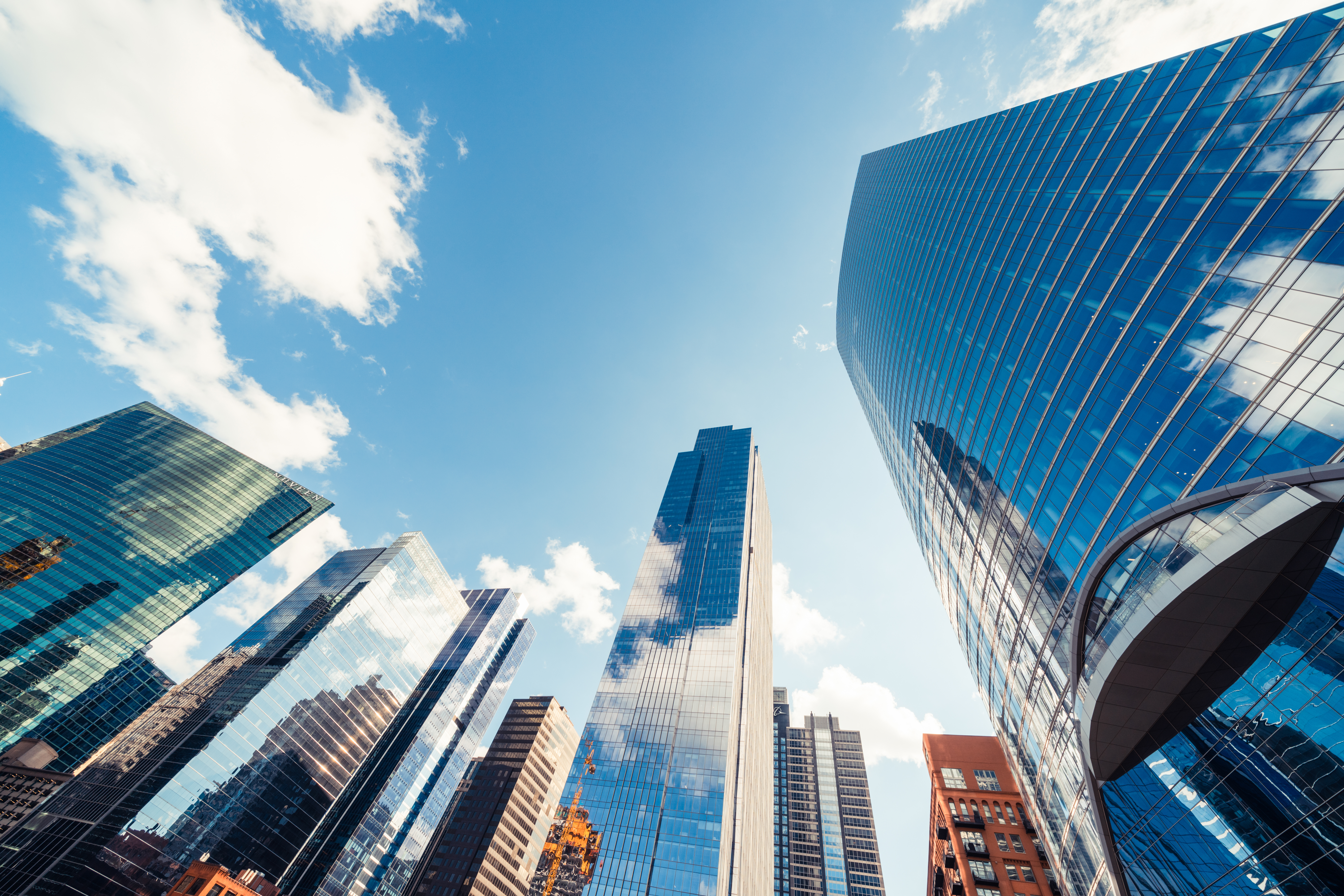 Our Q4 2019 market update projected that property would continue to harden, and that has come to pass. Early 2020 rate increases have been in the 10% - 20% range for non-CAT exposed accounts. Accounts with CAT exposure and poor loss experience are realizing 20%-plus increases, and tougher classes are experiencing even greater increases.

“As we head into 2020, the same market factors from 2019 are still in play, with the ultimate objective to return the book to profitability,” says Harry Tucker, Executive Vice President and National Property Practice Leader for AmWINS. Until profitability improves, the market will continue to see pricing, terms and conditions that benefit carriers.

While rates continue to climb, premium continues to flow into the E&S space. Data collected by the Surplus Lines Stamping office of Texas shows that 2019 E&S premiums for 15 state stamping offices, representing 64% of the U.S. E&S market, were up 19% YOY. All 15 states experienced growth, with 12 of the 15 reporting double-digit increases. “Interestingly, AmWINS’ book mirrors a very similar premium growth trajectory, in those same states,” says Tucker.

Additionally, the market is being influenced by three key trends:

Conservative limit deployment. Through Q3 2019, U.S. property/casualty surplus reached a new record of $802B, which indicates capital is stable and the “transitioning” market is not what has been considered in the past a “hard” market. Indeed, the property market does not lack available capacity: rather, carriers’ conservative limit deployment and a de-risking strategy largely contribute to current tight conditions.

Capacity in tougher classes has decreased as well, with loss severity and frequency the principal culprits behind this trend. Multi-family residential, hospitality, food processing, wood/lumber accounts and recyclers have seen the greatest loss of capacity as carriers look to de-risk their portfolios.

Increase in reinsurance pricing. Reinsurers are looking for minimum increases of 5% - 10% for 2020 renewals. “We had some 1/1 renewals where the carrier was looking for flat pricing and the markets refused to quote without an increase. Another issue will be the retro market as the cost of reinsurer protection is up some 15%-20%, which will drive reinsurance costs higher,” says Rich DiClemente, President of THB Intermediaries.

Expect to see a continued increase in reinsurance rates and a reduction in line size this coming CAT season and for direct carriers to pass this cost along to buyers. The extent of rate increases will be better assessed after the larger domestic CAT treaties renew at 4/1 and 7/1.

Loss development. Traditionally, property insurance did not have a “tail” — a carrier could reliably establish property loss reserves and settle claims shortly after an event. Today, loss development, or “loss creep,” is a growing concern for the market. This trend is demonstrated in the graph depicting the loss development of major natural catastrophe events post-landfall. Add to this trend the claims from wildfires over the past two years, and the problem for carriers compounds.

Other industry sources have also indicated that the magnitude of loss creep for virtually every major peak peril loss sustained in the last two years has surprised the market, and losses continue to develop adversely. This is changing how markets view property risk. No longer is it just the “magnitude” of losses that are considered: underwriting assumptions around perils that had traditionally been viewed as attritional, rather than catastrophic, are changing. 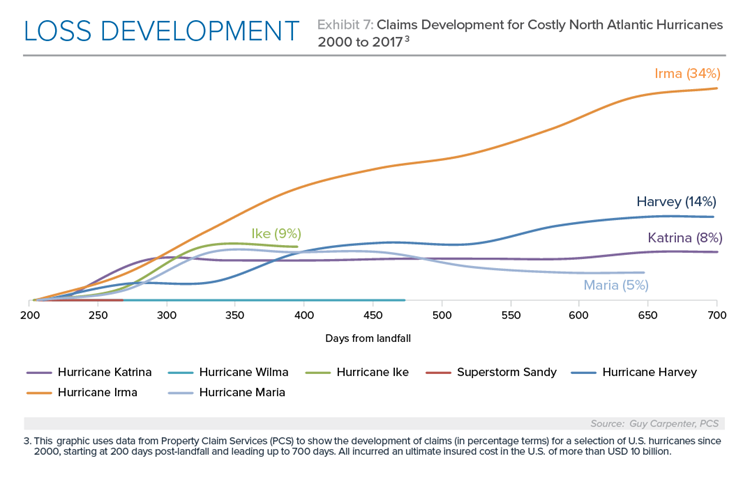 Taken as a whole, the property market will continue to see rate increase, discretionary limit deployment and tougher terms and conditions through 2020 and into 2021.

Within the property market, some classes that have seen notable challenges or changes include energy, cargo, hospitality, food and beverage manufacturing and auto physical damage.

For the fourth straight year in 2019, the energy market was unprofitable and, as a result, hardening has continued to accelerate. A number of carriers have restricted capacity and tightened underwriting, especially on smaller accounts. Upstream and midstream will remain volatile this year, with up to 20% rate increases expected for CAT-exposed accounts. Downstream accounts will be even harder hit.

“Conditions will get worse as the year goes on because of the unprofitability underwriters faced in 2019,” says Alistair Barnes, Executive Vice President - Energy Practice for AmWINS. “In this market, it can be a struggle for retailers to put submissions together with the amount of information required to obtain a quote. They need to be making use of a knowledgeable wholesaler as early in the application process as possible.”

The cargo market, and more specifically, the Stock Throughput line, underwent a massive correction in 2019. Many Lloyd’s underwriters ceased writing accounts in the fourth quarter as they reached their income limits.

“In 2020, new business will be written, but underwriters are already being much more selective so they don’t find themselves in the same situation as 2019, where they had exhausted their premium income limits toward the end of the year,” says Toby Kayll, Managing Director of the Marine and Energy division at THB Group. Underwriters are asking for far more information than in previous years, and the most complete submissions will be looked upon significantly more favorably than those which are not. Good COPE information is essential and non-sprinklered warehouses will be faced with significant deductible increases.

THB, AmWINS’ London broker, is continually searching for new non-Lloyd’s capacity, which is unencumbered by some of the Lloyd’s constraints.

Although hospitality risks nationwide can expect renewal rate hikes, conditions in in the sector vary significantly by account geography and loss history. Whereas Midwestern accounts may see a 5% - 10% rate increase and perhaps a higher hail deductible, risks in California, Florida and the Gulf Coast, and those with loss history, are seeing significantly greater premium jumps. Additionally, capacity pullbacks mean that accounts formerly written with a single carrier now require towers to complete.

“Retailers need to prepare their clients for the fact that, when you go from a single-market risk to multiple markets, it’s likely more expensive to build the same limits,” says Tom Cesare, Executive Vice President, AmWINS Brokerage.

Standard markets in the Food and Beverage Manufacturing space have significantly de-risked their capacity on renewals due to both hurricane and attritional losses, causing more accounts to enter the E&S market. “Rates have risen in the multiples, generally well over 20%,” says Theresa Lally, Executive Vice President, AmWINS Brokerage of New York. “This constricted capacity requires additional restructuring of accounts and introducing new carriers with many additional layers/quota shares to reach the necessary limits.” Many of the losses in the class were a result of heavy business interruption as well as local regulatory issues when operations went back on-line.

While the entire segment is challenging, there are a few areas that are faring worse than others. Liquor accounts are particularly difficult, due in part to the Jim Beam factory fire in July 2019 that destroyed 45,000 barrels of bourbon and contributed to a $50 million loss. A common strategy has been to place stock in the stand-alone Stock Throughput market in Lloyd’s at low rates and flat deductibles. This class has been experiencing even higher rate increases than other coverage lines. The significant market change can make Stock Throughput less economically viable then in previous years. This has forced the cover back onto the property placement, where we are observing rate increases of up to 2x and 3x expiring.

On accounts with foreign exposure, incumbent markets have cut back on these risks and they are being turned away by domestic markets, resulting in heavy reinsurance on some placements.

“In terms of limited capacity and rate increases, we expect 2020 to be more of the same and to possibly see additional constrictions in capacity,” Lally added.

For retailers, the good news is that there are new markets willing to write monoline physical damage coverage, which has typically been a more challenging placement. The bad news for buyers is that pricing overall is going up significantly, due to a combination of rate increases and climbing vehicle values.

“The price of large trucks and heavy equipment has more than doubled over the last decade,” says Judd O’Neal, Executive Vice President, AmWINS Group. “Markets are also a bit behind the eight ball in terms of getting enough premium to cover losses.” In addition to pushing for rate increases, underwriters are attempting to gain coverage concessions, including changing from a per-occurrence to a per-unit deductible and pulling back on towing limits.

The Property segment continues to evolve, and if capacity and new market entrants remain scarce, rates will continue to harden. Not many in the industry could not have imagined the change that has taken place over the last 12 months, but there are still opportunities to leverage wholesale partnerships and address even the most challenging client needs.