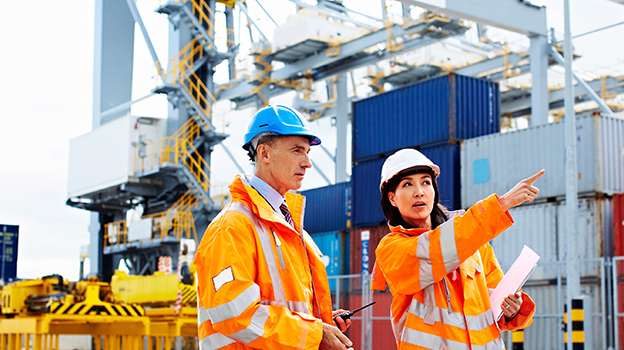 U.S. maritime employers routinely send employees overseas on temporary work assignments. These jobs include ship repair in foreign ports, supervision of cargo operations, new ship repair and warranty work during sea trials, and a wide range of other circumstances that bring U.S. employees to work on the high seas and in foreign territorial waters. If these workers do not qualify as crewmembers of vessels, then they need workers’ compensation insurance coverage.

At home in the U.S. these workers who are engaged in maritime employment, when performed on and around the “navigable waters of the United States”, are covered under the federal Longshore and Harbor Workers’ Compensation Act (USL&H) (33 U.S.C. 901 et seq.). Are they still covered by the Longshore Act when they leave the U.S. on temporary overseas assignments? Or are they covered by state workers’ compensation laws by means of voluntary foreign compensation endorsements?

The high seas/foreign waters issue with regard to Longshore Act coverage involves the limits and extent of federal maritime or admiralty jurisdiction, and there is some uncertainty with regard to coverage for these overseas workers.

Leaving aside questions of due process (jurisdiction over the parties) and convenient forum, a primary question is whether the overseas coverage of the Longshore Act should be coextensive with federal maritime statutes such as the Jones Act and the Death on the High Seas Act (DOHSA). These liability laws have been applied to injuries occurring on the high seas and in foreign territorial waters. What about USL&H?

There is not an actual conflict among the federal circuit courts of appeal on this question, but that’s because only one circuit has given a clear answer on the question of Longshore Act coverage in foreign territorial waters. There is, however, uncertainty.

Here’s a brief survey of where things stand right now.

Kollias v. D & G. Marine Maintenance, 29 F.3rd 67 (2nd Cir. 1994), cert. denied 513 U.S. 1146 (1998) – the Second Circuit held that Section 39(b) of the Longshore Act (33 U.S.C. 939(b)) indicates Congressional intent to cover the high seas under the Longshore Act. The court notes that this statutory reference to “the high seas” overcomes the general presumption against extraterritorial application of U.S. statutes. The Longshore Act was applied to this case where the injury occurred 200 miles offshore.

Weber v. S.C. Loveland Co., 28 BRBS 321 (1994) – this decision by the U.S. Department of Labor’s Benefits Review Board (BRB) applied the Longshore Act to an injury that occurred in the port of Kingston, Jamaica. The BRB, citing foreign application of the Jones Act and the DOHSA, based its decision on, “… the trend in admiralty law to extend coverage into foreign waters to provide uniform coverage for American workers, especially when all contact except for the site of the injury, are with the U.S.”

Keller Foundation/Case Foundation v. Tracy, 696 F.3rd 835 (9th Cir. 2012), cert. denied 133 S. Ct. 2825 (2013). – the Ninth Circuit held that the Longshore Act applies on the high seas, but that the foreign territorial waters and their adjoining ports and shore based areas are not the “navigable waters of the United States”. The Ninth Circuit cited the strong presumption that Acts of Congress do not apply extraterritorially absent a clear statutory indication, and unlike the Second Circuit it did not find this clear indication in the Longshore Act.

So, does the Longshore Act cover an American citizen injured on the high seas or in foreign territorial waters in the course of his or her maritime employment?


There seems to be consistent agreement (2nd Circuit, 5th Circuit, 9th Circuit, and the BRB) that the Longshore Act applies on the high seas, at least when the employee is on the high seas situs temporarily and all other contacts of his employment are with the U.S. And in the process of deciding its high seas cases the Second Circuit in Kollias indicated that it sees no problem with extraterritorial application of the Longshore Act. The court cited the statement in section 39(b) authorizing the Department of Labor to establish compensation districts for injuries occurring on the high seas.

But there is uncertainty if the injury occurs in the territorial waters or adjoining land areas of a foreign country if a case is going to end up on appeal anywhere but in the Ninth Circuit.

NOTE: Which federal circuit an appeal ends up in is based on the place where the injury occurs. The Ninth Circuit covers the U.S. West Coast, Alaska, and Hawaii.

What about everywhere else outside of the Ninth Circuit’s jurisdiction?


The last word from the BRB (in Weber) was that, subject to a few conditions, the Longshore Act applies in foreign waters. No federal circuit other than the Ninth has decided this question, and that circuit held to the contrary in Tracy.

It does seem to be a stretch to include foreign territorial waters in the definition of “navigable waters of the United States”. On the other hand, there is the concept of uniform coverage for American workers temporarily overseas for maritime work that has to be considered. And the BRB cited the Jones Act and the DOHSA, which have been applied in foreign waters. The BRB sees this as indicating a trend that U.S. maritime law will follow American workers overseas.

At any rate, maritime employers need a uniform answer on the issue of the application of the Longshore Act in foreign territorial waters. As seen above, the U.S. Supreme Court has declined to review this issue on more than one occasion. Eventually, an answer will be needed.


ABOUT THE AUTHOR
John A. (Jack) Martone served for 27 years in the U.S. Department of Labor, Office of Workers Compensation Programs, as the Chief, Branch of Insurance, Financial Management, and Assessments and Acting Director, Division of Longshore and Harbor Workers’ Compensation. Jack joined The American Equity Underwriters, Inc. (AEU), an AmWINS Group company, in 2006, where he serves as Senior Vice President, AEU Advisory Services and is the moderator of the AEU Longshore Blog.