When autocomplete results are available use up and down arrows to review and enter to select.
Resources + Insights
Mar 22, 2018 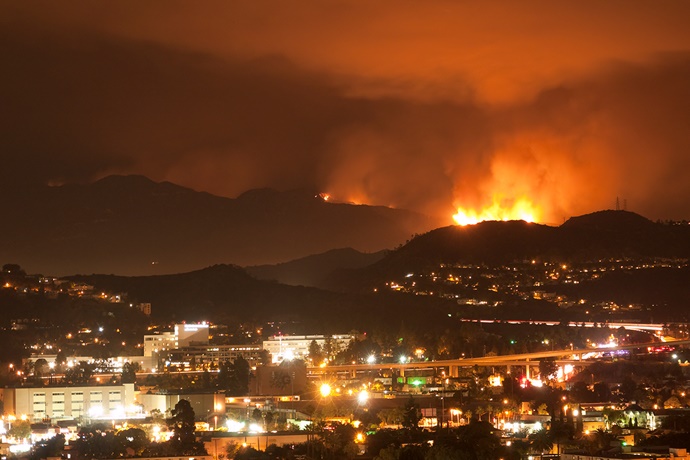 On December 4, 2017, a massive fire – named the “Thomas Fire” – was ignited and was not contained until January 12. As of February 2018, the fire remained active and had destroyed nearly 300,000 acres (more than 450 square miles) of mostly rugged terrain in Santa Barbara and Ventura counties. More than 1,000 structures were destroyed and hundreds were damaged. Although this is the largest fire in California history, the insured loss ranks seventh at $2.5 billion.

The Mudslide and its Damage

Subsequently, in the early hours of January 9, 2018, a massive amount of rain fell at the rate of one inch per hour in the fire area. The vegetation in the foothills, which could have absorbed much of the rainfall, had been destroyed by the fire. As a result, mud, debris, sediment, rocks and plants began a destructive path toward the Pacific Ocean. The hardest hit were the towns of Montecito, Summerland and Carpinteria, where nearly one inch of rain fell during the first 10 minutes of the storm.

The debris floor of the mudslide and debris flow was 1,000 feet wide, and it changed the elevation in some neighborhoods by as much as six feet. In the aftermath, 82 million pounds of mud and debris were removed and taken to the Ventura County Fairgrounds for gradual relocation to other areas throughout the region.

128 homes in the Town of Montecito, where the median home price is $4 million, were destroyed. Another 307 houses were severely damaged. Although it is too early to understand the actual insured loss, it is currently estimated to be in the hundreds of millions of dollars. Tragically, the mudslide took the lives of 23 adults and children, the majority of whom were not under mandatory evacuation orders at the time.

On January 29, Dave Jones, California’s Insurance Commissioner, issued a formal notice reminding carriers of their duty to cover damages from the recent mudslide and debris flow caused by the destruction of vegetation by fire which would have otherwise absorbed rainfall and held the soil in place. His explanation referenced the “efficient proximate cause doctrine.”

This doctrine has its basis in the 1865 New York Civil Code, which was enacted in California in 1872, and became Section 530 of the first California Insurance Code in 1935. This remains in the Code today.

Under this doctrine, the efficient proximate cause of the loss is the one that sets the other causes in motion that in an unbroken sequence produces the damage. This should not be confused with the “Concurrent Causation Doctrine,” where separate excluded and covered causes (perils) simultaneously join to produce damage.

Since then, there have been many California court cases challenging this doctrine, several of which resulted from denial of claims for catastrophic damage caused by floods, earthquakes and landslides.

The most notable in recent memory are:

Guyton 1982, flood (excluded) but covered because the efficient proximate cause of loss was the water district’s negligence in its failure to provide adequate flood control facilities.

Welsh 1983, flood (excluded) but covered because the efficient proximate cause of loss was the faulty installation of a drain by a third party.

Motte 1984, earthquake (excluded) but covered because the earthquake was caused by tectonic plate movement, which was not excluded. To make matters worse, 1,678 single family homes were damaged or destroyed. Many had no outward damage but were determined to be constructive TOTAL losses because the wood frames had come apart at the corners, and claims were paid on that basis.

That same year (1984), Section 10088 was enacted by the California State Legislature as part of the Earthquake Insurance Act, requiring insurers of residential property to offer earthquake coverage. The courts, including the appellate court, have repeatedly said that CIC Section 10088 applies in all circumstances and that it precludes coverage for ALL earthquake-related losses absent specific earthquake coverage. This language was part of the negotiations with insurers, who lobbied to ensure that Section 530 would not apply in the absence of earthquake coverage on a policy. The only exception to this is in 10088.5, which does not exempt an insurer from its obligation under a fire insurance policy to cover the losses from a fire that is caused by or follows an earthquake.

As a result of these litigated cases and the catastrophic storms and historic rains during those years, which resulted in thousands of California homeowner flood and landslide claims, the Insurance Services Office (ISO) quickly revised the exclusions and replaced the term “all risks” with “risk of direct physical loss unless excluded or limited.”

Howell 1990, landslide (excluded) caused by heavy rains after a fire was covered because the California appellate court concluded that an insurer could not exclude coverage when an insured peril (fire) was the efficient proximate cause of loss. This case was brought after the ISO changes mentioned above.

Once again, ISO revised the language (known as “anti-concurrent causation” language) to clearly state that loss caused directly or indirectly by an excluded peril is excluded regardless of any other cause or event contributing concurrently or in any sequence to the loss.

In a 2015 Texas case, the Fifth Circuit had the opportunity to develop case law involving the current ISO language in a case involving combinations of covered wind damage and excluded flood damage. In it, they concluded that the only damage covered under a policy with this anti-concurrent causation language was damage caused exclusively by wind. Texas insurers are now facing claims from Hurricane Harvey in which “anti-concurrent causation” language will no doubt be challenged again.

Currently, “anti-concurrent causation” language within an insurance policy is generally enforced. However, California – along with North Dakota, Washington and West Virginia – still refuses to enforce this language by case law or statute.