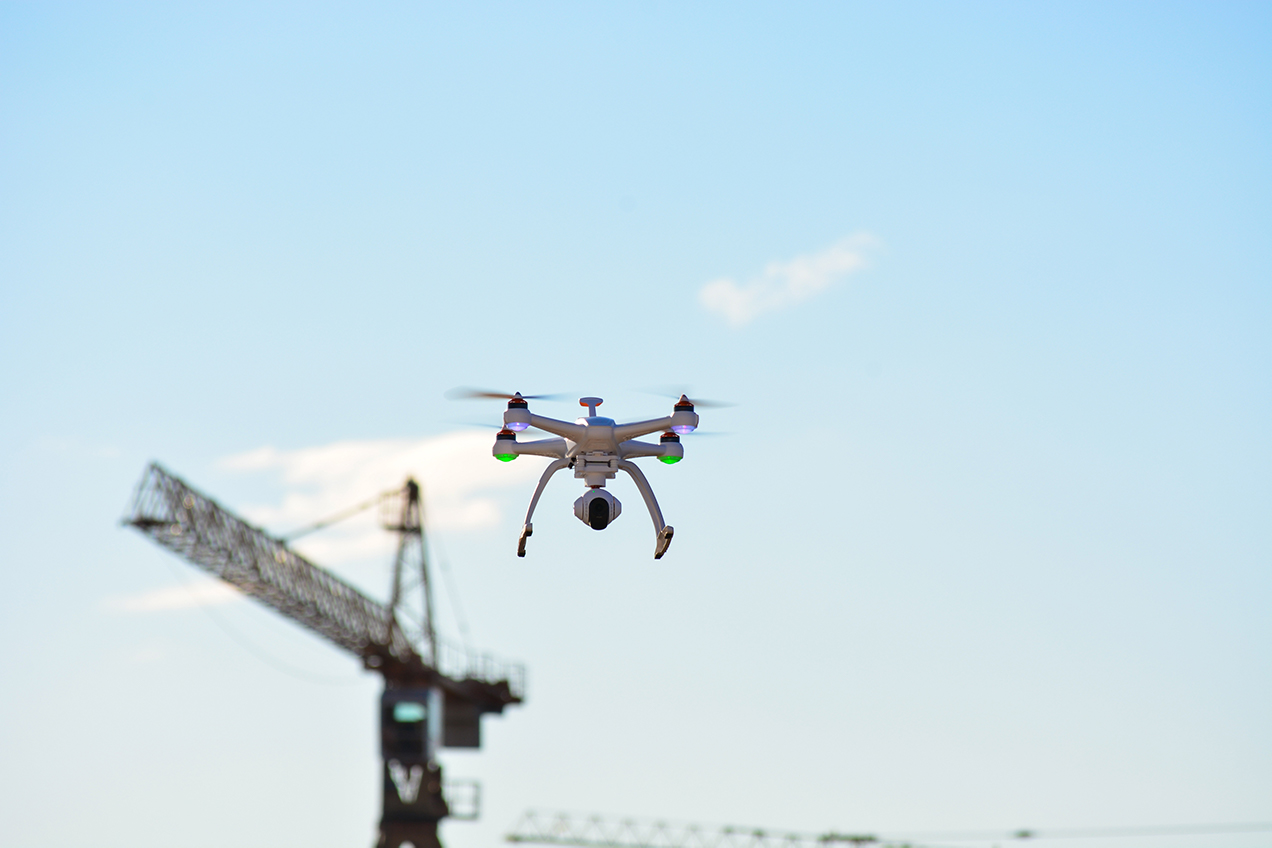 Drones have many applications.  Commercial drones have been used for agricultural applications, disaster response/relief, movie production, aerial news coverage, wildlife monitoring, border surveillance and many other uses.  The use of drones in the construction industry has increased significantly in the past few years.  Drones can revolutionize the lifecycle of a project.

Drones are unmanned aircraft systems (UAS), also referred to as unmanned aerial vehicles (UAV).  Drones are typically very small and lightweight, and although many drones weigh only a few pounds, they are still classified as aircraft.  Drones are technically considered ‘unmanned,” but they do have operators who control the drone from the ground.

The cost of commercial drones may range from a few thousand dollars to more than $30,000.  There are additional costs for the ‘payload’ or technology equipment installed on the drone (such as cameras, software, GPS and sensors) and for the corresponding ground technology equipment and software for the operator.

Commercial drones are either fixed-wing or have rotating blades.  Fixed-wing drones may only be able to fly forward.  Conversely, drones with rotating blades are easier to control and their design allows them to hover and be more useful for closer aerial views.  The flight time of drones ranges from 15 to 30 minutes on average, depending on the design of the drone, battery power, weather conditions and range of flight.

A non-racing drone can reach speeds of between 30 and 60 mph.  Higher speeds are possible, depending on the design and power of the drone.  Racing drones may have speeds of more than 125 mph.  In 2017, the Drone Racing League claimed a spot in the Guinness World Records with a battery-powered quadcopter that reached a top speed of 163.5 mph.1  Military drones may reach speeds of 300 mph.

Aerial intelligence can provide significant benefits to the construction industry.  The following is a general discussion of the benefits of implementing drone technology for construction projects, but the list is far from exhaustive, and the benefits will differ depending on the project and the technology equipment used.

Once drone technology is implemented, benefits can include increased efficiency, cost savings, and improved project management.

Risks associated with drone technology require the same risk-management analysis performed for any other risk the contractor has.  First and foremost, risk management requires the identification of risk.  Once risk is identified, the contractor can determine the best way to manage that risk.  The following discussion identifies some of the key risks associated with drone technology.

In 2012, Congress passed the FAA Modernization and Reform Act (FMRA), which required the Federal Aviation Administration (FAA) to integrate drones into the National Airspace System (NAS).  In 2015, 20 states enacted laws on drone use, and dozens of states considered doing so.  In 2016, the FAA finalized operating rules for small drones under Part 107.

Part 107 applies to drones weighing less than 55 pounds that are conducting non-hobbyist operations.  Key elements of Part 107 include:

Various waivers can be applied for.  In addition to these guidelines and others, the pilot must receive certification, which includes a minimum age requirement, vetting by the TSA and passing a test on aeronautical knowledge.

It is possible that a company who willingly engages the services of a drone operator knowing that he or she does not hold a Part 107 Remote Pilot Certificate could be subject to federal legal action.

If a contractor or owner of a project anticipates utilizing drones in the construction of a project, regardless of whether the drone is operated in-house or outsourced to a third party, compliance with state and federal law is critical.  It’s important to remember that drones are considered aircraft.

Insurers who write specific coverage designed for drones will have coverage tailored for the exposure.  For example, an insurer specializing in drone insurance likely will not have an exclusion for loss arising from electronic malfunctions and failure of electronic components, accessories and power equipment.  The insurer should be able to offer coverage for hi-jacking or any unlawful seizure or wrongful exercise of control by means of spoofing or hacking.

Cyber insurance should be strongly considered.  An insurer may need to specifically endorse an existing cyber policy to insure the exposures associated with drone technology, such as data, media, hacking/viruses and third-party liability.

When contractors embrace technology, such as drones, in a responsible manner, the benefits can outweigh the risk of using the technology.  Drone technology in the construction industry can revolutionize projects and give the contractor a competitive edge.  Conversely, if the risks and legal requirements are not understood and managed, the use of drones in construction can have a significant negative impact on a contractor’s reputation and business.